SRINAGAR: J&K Bank Chairman and CEO Parvez Ahmed received the prestigious SKOCH Award in Banking and Finance Silver Category for the establishment of thirty-five J&K Bank Easy Payment Units in Leh Ladakh Region leading to a revolutionary inclusive banking and rural expansion, which was recognized at the 55th SKOCH Summit held at the Constitution Club of India, New Delhi. 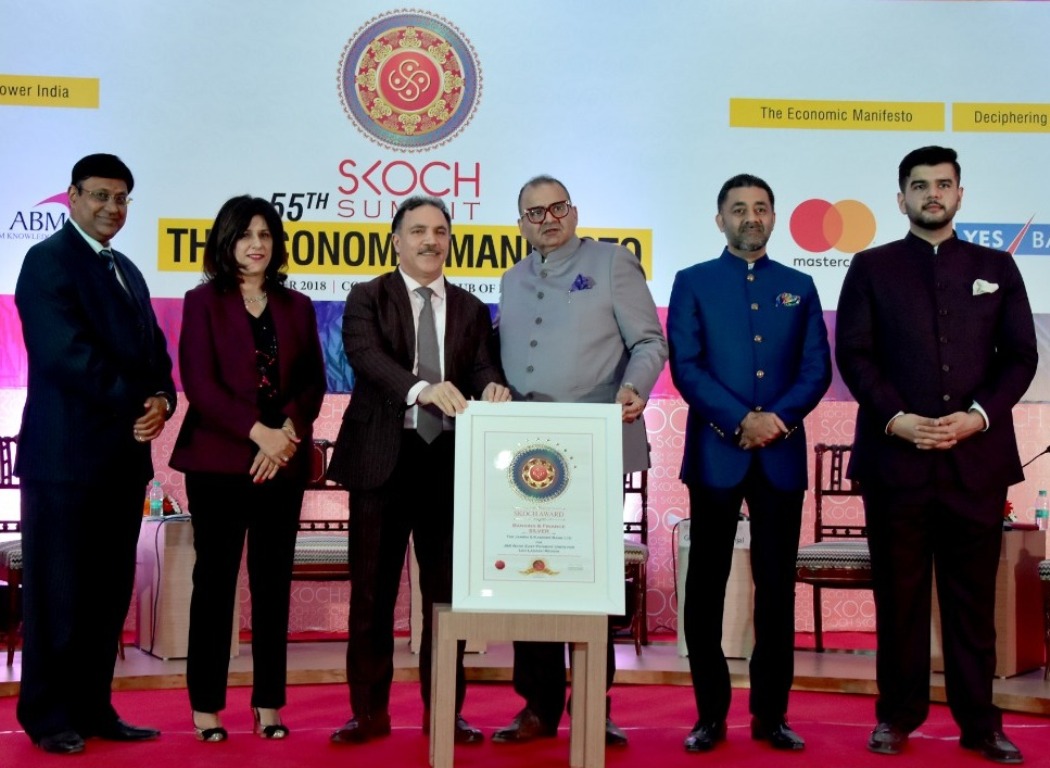 The Bank also received two Order of Merit citations having been rated and qualified on three parameters; early evaluation, jury evaluation and popular vote which were received by Parvez Ahmed in the presence of President & Zonal Head Ladakh Chetan Paljor and Zonal Head Delhi Fayaz Siddiqui.

While dedicating the recognition to the people of Leh- Ladakh Chairman & CEO JK Bank reiterated Bank’s commitment to serve the people to the last mile through its round the year services regardless of climatic or topographic challenges. He asserted, “Our mission is to be instrumental in improving the economic profile of our people which can only happen when we improve the credit penetration in the state by expanding our footprint to lend more in the productive sectors especially to the entrepreneurs. We intend to map the whole geography in the state in such a manner that nobody in the state should be travelling more than 5-10 Km for availing the banking facilities. Concomitantly the aim is to formalize the savings to channelize for productive deployment besides unshackling the people from the exploitative informal channels of lending. The Bank upon the success of the Payment Units in Leh-Ladakh will now be scaling the model to other remote and challenging locations of the state of Jammu and Kashmir.”

The JK Bank’s Easy payment unit project was selected after a stringent multi-layered evaluation procedure including whetting process based on desk and secondary research followed by an evaluation and presentation process judged by the industry experts and noted panellists over numerous parameters including innovation and social impact; qualified by the team of Bank’s Chairman Secretariat, Jammu followed by an online voting process at Twitter and thus went on to bag the prestigious award out of  more than forty entries from various banks and financial entities in the category of Financial Inclusion and Rural Expansion.

The JK Bank Easy Payment Units to financially include all the 111 villages in Leh Ladakh were inaugurated by the Governor J&K State, Satya Pal Malik who had cited the bank’s initiative a great service and facilitation to the people bringing inclusive growth regardless of economic background and contributing towards the steady development of the state economy.